William Percy Barlow was born on 30 July 1912 in Charter Alley. 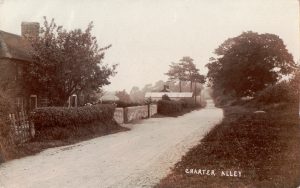 Charter Alley where William was born.

His parents were Percy and Maria Barlow (née Jones). Percy was a ‘Broom Maker’.

He was the only child from this marriage. His mother, Maria, died in 1919 when William was just 7 years old. She was buried at the Old Meeting, United Reformed Church, Tadley on 29 September 1919.

Percy Barlow’s second marriage was to Caroline Bowman on 25 October 1924 when William was 12 years old. Caroline was from the family of Bowmans who lived at Bowmonts Brook and the marriage took place at the Old Meeting. William and his father Percy had moved from Charter Alley by now and were living at Mount Pleasant. Percy was still a broom maker.

At the time of his marriage William was recorded as being a ‘Steward in the Royal Navy’. This was on HMS Challenger. They had no children.

At the time of his enlistment he was recorded as being a ‘Fitter’s Labourer’ and was 5 feet 3¾ inches tall with light brown hair and grey  eyes.

During his naval career William served as a steward, eventually reaching the rank of leading steward to which he was promoted on 1 December 1941.

At the time of his death he was serving on HMS Hollyhock a Flower-class corvette, a small escort warship primarily intended for a shipping protection role. She was laid down at John Crown & Sons Ltd shipyard in Sunderland on 27 November 1939, launched on 19 August 1940 and commissioned into the Royal Navy on 19 November 1940. 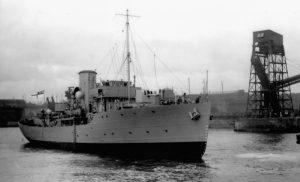 In April 1942, HMS Hollyhock was deployed in escorting RFA (Royal Fleet Auxiliary) Athelstane, a tanker requisitioned for support of fleet units during the search for the Japanese naval fleet in the Indian Ocean.

On the evening of 8 April 1942, the Hollyhock was ordered to leave Trincomalee harbour, on the north-east coast of Ceylon (Sri Lanka), along with the minelayer HMS Tiviot Bank, RFA Pearl Leaf, the tanker British Sergeant and RFA Athelstane. They were sailing southwards, with orders to keep close inshore and to be at least 40 miles from Trincomalee by dawn on 9 April. At around 12 o’clock, nine Japanese aircraft from Admiral Nagumo’s carrier fleet attacked the Hollyhock and Athelstane.

The Hollyhock sank within 5 minutes, with bombs going straight down her funnel. In all 53 lives were lost, the Captain, two officers and 50 ratings. Only 16 survived the attack. Five of the Japanese aircraft then turned their attention to the Athelstane. She was also sunk, but all hands were saved. 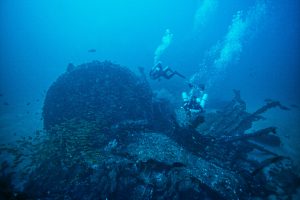 He is commemorated on the Portsmouth Naval Memorial (Panel 70, Column 1), Southsea Common.

These would have been sent to his wife.