This history is an updated version of the article published in projectnews 7 (January 2005).

From just talks in the early years to talks, research, popular publications, newsletters, free project papers, calendars, charity fund-raising and visits to places of interest, these developments show the progress of the Society in the twenty years between 1984 and 2004.

Tadley and District Society (TADS) held its inaugural meeting on 21 November 1984 in St Paul’s Church Hall, Tadley. This meeting was arranged as a result of the considerable interest shown in old photographs of local people and places and in illustrations borrowed from AWRE Aldermaston showing the history of Aldermaston Village, the Estate and the Airfield, which were displayed at the St Paul’s Church Summer Fete in June 1984.

Twenty-eight people entered their names on a sheet of paper hurriedly produced and headed “LOCAL HISTORY SOCIETY – ARE YOU INTERESTED?”. The first name on the list was Mr E W (Ernie) Kimber. Subsequently a notice was placed in the local newspaper and in the church magazine announcing the inaugural meeting and a potential Chairman was sought.

Mr Roger Searing, a retired headmaster of the Burnham Copse Junior School, who had produced a number of historical articles on Tadley and Reading for a Reading newspaper and who was also co-author of the booklet Tadley Tracks, Tadley Facts published in 1982, was approached and was prepared to accept the post of Chairman of the Society. 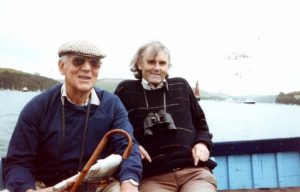 Roger Searing and Pat Minter; their friendship and shared interests greatly benefited TADS
throughout their years as serving officers.

The meeting was much encouraged by the support and advice given by Mr and Mrs Woodruff of the Mortimer Local History Group, and Mr John Oliver of the Basingstoke Archeological and Historical Society.

The first speaker to the Society was Arthur Attwood, the Basingstoke journalist and historian, who gave a talk on 30 January 1985 entitled ‘The History of Basingstoke’.

The membership increased steadily over the twenty years and in 2004 stand at 103.