History of TADS – trips and outings

Looking out over the Houses of Parliament, TADS members enjoy one of London’s
most popular attractions: The London Eye (2002). Once again the weather was kind to us!!

As well as the regular monthly meetings, one of the main events of the TADS calendar has been the ‘annual trip’ in September. Over the years members and their guests have visited a wide range of diverse and interesting places throughout the south of England. As well as the ‘annual trip’ there have also been many other interesting ‘one-off’ outings.

In the early days visits were mainly afternoon or evening trips made locally. The first was to Newbury Racecourse on a bitterly cold evening in July to see ‘The Flower and The Nettle’. Others soon followed: Padworth Church; The Countess of Huntingdon’s Connexion Chapel, Mortimer West End; Wyeford House; The Manor, Aldermaston; Ufton Court and Engelefield House where Sir William Benyon told us to call him ‘Bill’.

The visit to Andover Iron Age Museum and Danbury Hill Fort proved entertaining when several members were asked to stand in a circle, pretending to be an Iron Age hut!

This year many members made their first fearful steps behind the wire to view the AWE Collection.

Since 1997 a summer evening visit has been made annually to the archaeological dig at Silchester where Professor Michael Fulford and subsequently Amanda Clarke have updated TADS members on the finds and progress made on the site.

The following year’s outing was to Gloucester Docks, where Robert Opie’s packaging museum was housed.

Pat Galvin organised trips from 1996 to 2002. These included Chiltern Open Air Museum, Wilton House and carpet factory, The Globe and the Theatre Museum in Covent Garden where two members was given a stage make-over. 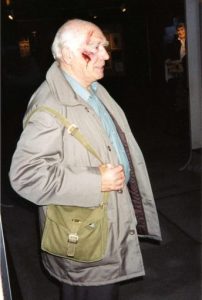 Chairman, Bob Brown, was made-up to look like he has been in a fight
during our visit to the Theatre Museum, Covent Garden!

In 1999 members visited Greenwich and the Thames Barrier. It was a beautiful morning to see London from the Observatory, looking down to the college, river and Millennium Dome. Some visited the museum and the Cutty Sark before going down river to the barrier: the huge engineering achievement designed to prevent London flooding.

A trip to Bristol in 2000 to see the restoration of Isambard Kingdom Brunel’s ‘Great Western’ so impressed members that we donated the proceeds from our Christmas raffle to the work. 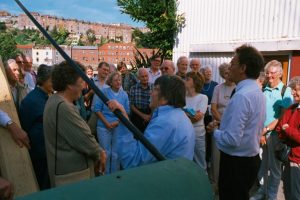 A glorious day for the trip to see Isambard Kingdom Brunel’s Great Western In Bristol. Much to do and see,
TADS members listen as the guide explains the history and restoration of the ship.

The Bletchley Park visit in 2001 coincided with a TV series and the film, Enigma, regarding the importance of the code breaking work undertaken there during World War II. Unfortunately this was a very wet day but as our brains were taxed by the range of code breaking machines on display inside the wartime buildings we barely had time to notice.

Fortunately, the following year (2002) we had lovely day for our ride on the London Eye, followed by a walk across the Thames on the ‘no-longer wobbly’ Millennium Bridge into the City. There we had a guided walk which gave us a fascinating insight into London after the Great Fire.

In 2003 Bob Bysouth took over as outings organiser, continuing the tradition of finding historically interesting places to visit: The Royal Pavilion, Brighton (2003); Portchester Castle and Fishbourne Roman Palace (2004). Many of those who made this visit were surprised by the size and history of Portchester Castle. The outer defences incorporate the remains of a Roman fort established in 280AD and believed to be the most complete of any Roman fort in Europe. It is unlikely that the fort at Portchester was ever entirely abandoned after the collapse of the Roman Empire, as evidence of Saxon, Norman and Royal ownership remains. In 1628 it was developed as a naval storehouse and later to house prisoners of war. The last of these left the castle in 1814. It stood as a ruin until it passed to English Heritage in 1984.

In 2003 Bob Bysouth also organised the first ‘away trip’, to Skegness, where members joined a two day tour of Lincolnshire wartime airfields, monuments and museums. The trip was described by one TADS member as a ‘spirited romp through British aviation history’. Lincolnshire was and still is our second largest county and by 1912 had 48 airfields spread across its 33,000 acres. It is where Cranwell, the Officer Flying Training School, was established in 1916 with the first concrete runway. RAF Scampton is where, in 1943, the planes with Barnes Wallis’s ‘bouncing bombs’ set-off for the Rhur dams and where ‘Nigger’, Guy Gibson’s dog, is buried. Today the Red Arrows fly from Scampton. Between 1939-1945 there were 48 operational airfields in Lincolnshire; this has now been rationalised to two. 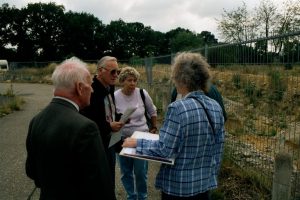 Closer to home, TADS is keen to research recent local history.  Here members, on a walking tour of Tadley,
study the remains of World War II buildings in and around the town.

Amongst the tour group were a number of ex WAAFs and WREAFs who helped to bring the experience alive: Betty, who drove ‘Queen Marys’ in Transport Command and chauffeured Guy Gibson and dignitaries to Buckingham Palace for meetings with George VI, and Peggy, who had met ‘Monty’ in the course of her wartime work.

Throughout the years, weatherwise, luck has usually been on our side, long may it continue.