Hurrah! Our first live talk for many a long month.

In the good old days of yesteryear we tend to think of baddies as highwaymen, footpads or pirates. To have our own home-grown TERRORIST is quite alarming…..

James Aitken, or John the Painter, would no doubt be analysed in the 21st C as ‘having a syndrome’ or similar. He was born in 1752, in the reign of King George II, the 8th of 12 children to an Edinburgh tinsmith (known as a ‘whitesmith’). His Dad died very young but James did have a rudimentary education till he was about 14 when he became apprenticed to a painter.

Alan said James ‘was short, scraggy, red-headed, freckled and he stammered’, and not your Rembrandt, Picasso or Constable but a HOUSE painter. That apprenticeship didn’t last long: tiring of Scotland’s Depression he high-tailed it off to London. Still unable to find work – he took up footpadding, or your-money-or-your-life guntoting highwayman, or just a common thief.

James was ‘sold to a sea captain’ and in 1773 sailed from Deptford, London to Jamestown, Virginia, U.S.A. Finding Jamestown rundown and the Americans disagreeable to the Scots, he legged it to North Carolina, telling fibs and tall stories along the way.

However, James favoured American Independence from Britain so he went on the spree as a saboteur and mercenary against us, not for idealogical, zealous or religious reasons but to idle away his unsatisfactory life.

At the time of the Boston Tea Party, 1775, he returned to Britain and decided to join our Merchant Navy at Liverpool. Well, they did supply clothes (a uniform), money and security didn’t they?

No, tiring of his brief sojourn at sea James joined an Army regiment, took the vast sum of 26 shillings (about £1.30p today) and deserted! Soon he’d covered most of England’s counties, Alan said, as a robber…. Everywhere he went he carried his painting equipment and radical material.

Travelling further South, probably by cadging lifts or hitch-hiking, John/James arrived briefly in Titchfield, Hampshire. From there, on to Portsmouth Dockyard and the rope-making shed, with arson in mind. That being unsuccessful – the matches wouldn’t ignite – he went via Exeter to Plymouth Docks. No luck. So, off to Paris where one Silas Deane, the American Commissioner egged John on to further sabotage in England by giving him encouragement and a passport.

As an arsonist John was mostly unsuccessful, but he was being noticed around pubs, Chatham Dockyard, Titchfield again, Bristol, Portsmouth, Plymouth and news had reached King George III (reigned 1760-1820). The King thought we’d been infiltrated by an American spy and agent, so John/James was hunted in earnest. In Calne, Wiltshire, he rifled shops, but his luck ran out in Andover and in Hook where he was caught at the Raven Hotel and incarcerated in Odiham Gaol. Some of these towns and villages were uncomfortably near to Tadley – we were lucky! While on remand in London’s Clerkenwell Prison, an agent was ‘planted’ in his cell. John talked and talked and incriminated himself.

In 1777 John the Painter was tried in Winchester Great Hall, and found guilty. He was hanged in Portsmouth Dockyard on the specially-constructed, highest gibbet ever. 20,000 people watched the hanging spectacle of this lonely, infamous, terrorist, arsonist, rapist individual. What a waste of a very, very young man’s life. John/James the Painter, Terrorist Extraordinaire, was only 25 years old when hanged. But amazingly the only crime he ever regretted happened in Basingstoke: he raped a milkmaid.

Alan said his Scottish family may have been unaware of his criminal life – unless they read about it in the papers.

Thank you Alan, for this very vivid, brutal and shocking story you told, but it had to be said – maybe there’s a warning for someone, somewhere……

Thank you Rosemary. Its nice to have you back again doing your inimitable write ups after a long break – Ed . 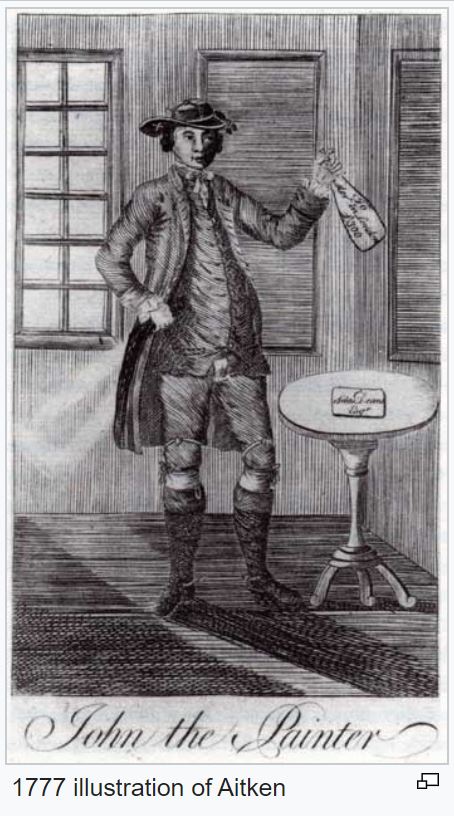 Using his training with mixing chemicals and paint solvents from his trade as a painter, Aitken solicited the help of several others in constructing crude incendiary devices with the intention of burning down the highly flammable buildings in the Royal Dockyards. Over the course of several months Aitken attacked facilities in Portsmouth and Bristol, creating the impression that a band of saboteurs was on the loose in England.