The History of Houses

Trevor is Chairman of the Wokingham History Group and has a special interest in the area’s historic buildings. He gave a chronological review of houses from pre-Roman to the present, with very good illustrations from real buildings.

His first point was that the building of houses is a very labour intense process. Even the very early houses of the Iron Age used a great deal of timber, from trees which had to be cut down, shaped to be useful, and moved to where the house was to be built. Until fairly recent times all the sawing and shaping was done by hand, using saws, axes and adzes.

Iron Age houses were round with thatched roofs, a smoke hole at the top. They would have been cosy with a single large space. We find evidence of them from post holes left in the ground where the wood has rotted away. The Romans, in Britain for only 400 years, brought lots of skills – brick and tile making, plastered and painted walls, heating, mosaic floors and glass. Their houses had multiple rooms and gardens. After the Romans left all that was forgotten, and the inhabitants of Britain went back to large huts.

The invading Normans brought many changes and by 1300 A.D. there are examples of single cell open hall houses with flint walls, thatched roofs, and central hearths with a smoke hole above in the apex of the roof. These evolved so that by 1350-90 A.D. the cruck frame was used with mortice and tenon joints, and the houses were now built on the ground not anchored in it. Walls were wattle and daub, and today blackened roof timbers are evidence of the open hall style with a central hearth. Windows were ‘Mullion’ with vertical bars.
There are local examples of cruck framed buildings- Ed.

Changes in style continued. Trevor showed an example of a mid 1400sWealden House with 200 main timbers in its construction. It had a large open hall in the centre, a single room at one end, 2 floors and a cross passage. The labour used to build it must have been enormous. Jettied floors were another innovation where the upper floors extend over the supporting outer wall or wooden frame of the building. This may have been for structural reasons but at the least the jetty sheltered those below and the walls from the rain (or chamber pot contents). In the 1500s chimneys came into use, replacing the central open hearth, and with them the inglenook big enough to sit people inside the chimney base for extra warmth. It was also a place where a salt cupboard would be located to keep the household salt dry. By the early 17th C. glazed windows with small diamond panes came into use and by the end of that century glass making was good enough to allow bigger sash windows. A 1660Merchants House in Marlborough shows that interior decoration, which was often quite gaudy, even went as far as a ‘tromp l’oeil’ staircase. Bricks were beginning to be used for building, although they must have been locally produced as they are very heavy to transport.

The interior style of houses was much more like our own with multiple rooms and full height staircases, although fireplaces were back-to-back placed in the centre of the house. The early 1700s brought the lovely brick-built Queen Anne style of house, and twenty years later brick terraces were being built in the bigger towns. Although costly, the move to brick buildings was partly a response to the terrible 1666 Fire of London which tore through the closely packed timber buildings. A 1774 Act of Parliament made bricks a requirement for town houses.

The coming of the railways in the 1840/50s made it easy to produce bricks centrally and distribute them cheaply, as were slates and roofing tiles. Hence the building of mass ‘Victorian’ terrace housing. The railways even enabled the start of commuting and the fashion for country villas.

The Edwardian period had its own style, a subtle change with the beginning of the 20th C., although the fairly small number of Arts and Crafts houses were very distinctive. Bungalows also began to appear at this time, something coming out of the Indian empire. The later 1920s brought the first large estates of suburban houses, and in 1929-30 came a limited number of Art Deco buildings which had lots of glass giving light and airy interiors. The period after the Second World War saw a great demand for housing to replace that destroyed by the German bombing. The quick answer was prefabs. They were supposed to last only a few years, but 70 years later there are some remaining in use, including a few in Basingstoke. Another legacy of the War was the building of the new towns and the overspill invasion of old ones like Basingstoke. Trevor lives not far from Bracknell, a New Town, and said it is actually very well laid out and with recent refurbishment even the Point Royal tower block “works well”. Since then, there has been relentless expansion in all towns. Trevor’s Wokingham has 12,000 new houses being built. You can see changes in style about every 10/20 years. Is the 2020s style a Wimpy/Barrett mongrel? Who knows what will come next.

Thank you, Trevor, for you very interesting and lengthy talk about houses, a massive subject, but something in which we all have a vested interest. We are lucky that in Tadley we have some very old buildings to remind us of the way houses developed. 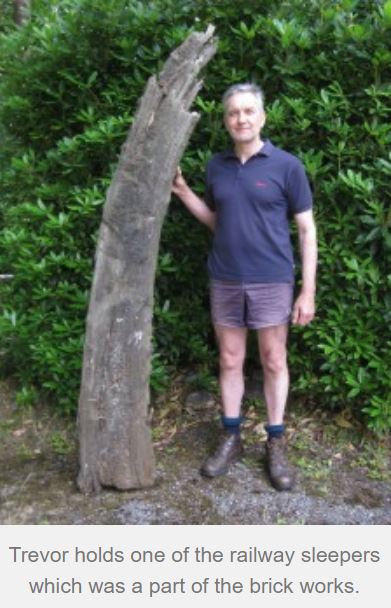 Trevor Ottlewski; researcher, author and Chairman of the Wokingham History Group. Trevor has a wide knowledge of local history and specialises in the area’s historic buildings.