In addition to the monthly talks held at St Paul’s Hall, The Green, TADS has a very active project group which meets regularly to discuss and consolidate the research for current and long term projects. It is not always as dry and studious as it may sound. A few glasses of wine or beer have been known to pass lips!!

One of the first major projects for TADS was the publication of the books: Around Tadley – fact and fable and the companion volume Around Tadley – people and places, published in 1999 and 2001 respectively. The first book contains written histories of people and places in the Tadley locality, while the second book is a collection of photographs. Most of the proceeds from book sales were donated to the charity SeeAbility with a subsequent donation to Tadley First Responders. 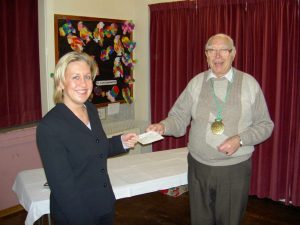 Presentation of a cheque to Zoe Mawle, St Michael’s Hospice, from the sale of the TADS 2004 calendar.

Another project that benefits charity is the TADS calendar. The subject of the 2004 calendar was ‘Street Scenes’ in Tadley from early in the 20th century. From the proceeds of sales two donations were made: St Michaels Hospice and Tadley Citizen’s Advice Bureau. The 2005 calendar portrays local public houses as they appeared in the past. Most of the photographs in the calendar are from old postcards. 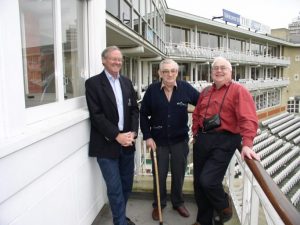 Whilst researching local artist, George Roller, a visit was made to The Oval cricket ground to view his paintings
in Summer 2003. Left to right: Surrey Cricket Club archivist, Derek Ward, Jim Stevens.

Since 1997 The University of Reading have undertaken further excavations of the archaeological site, Calleva Atrebatum, at Silchester. Although this is primarily a part of the students degree study, members of the public are encouraged to become actively involved. As a result, for the first time this year TADS sponsored enthusiast Revd Gavin Rogers who spent one of the wettest weeks of the summer on the site, digging and re-digging waterlogged trenches! Despite this he said he thoroughly enjoyed his time, recommending the experience. The highlight of his week was his discovery of a well preserved silver denarius coin from the reign of Emperor Trajan (89-117 AD). Applications for 2005 sponsorship are currently being sought. If you are interested please contact TADS.

The Hurst School History Prize (now known as the Hurst Community College History Prize) was established as part of the Society’s 10th anniversary celebrations, to encourage pupils to produce a historically based project. The prize has been awarded annually since at least 1995.

A major project this year was the Time Capsule. In 2001 Tadley Community Centre Association challenged TADS to fill a time capsule to be placed in the floor of the foyer at the Centre. The capsule was buried on Saturday 20 March 2004 at a ceremony performed by Adrian Noad, the Chairman of the Community Association.

One of the Society’s longest running  projects is researching multi-talented local resident Major George C Roller (1856-1941) who, for much of his life, lived at ‘The Wilderness’ (now Tadley Court). Major Roller was an artist, a soldier, who served both in the Boer War and World War I, a steeplechase rider, a London Magistrate, and a Governor of London Hospitals and the Royal Berkshire Hospital. He excelled at all these tasks, but it is his skill as a painter/artist, in particular as a picture restorer, that he was known world-wide.