From the begining a regular event in the Society’s programme has been the monthly speaker. Over the twenty years there has probably been in the region of 190 speakers offering a wide-range of topics. There is not space to list all of these, merely a few of the more memorable.

As a feature of the yearly programme our speaker organiser, Bob Brown, has tried to include a talk on local transport: The Great Western Railway by L.Waters (1986); The Brookwood Necropolis Railway by John M Clarke (1988); The Basingstoke Canal by Stan Knight (1991); How the Railway came to Basingstoke by David Brace (2002) and  Local Bus Services by Paul Lacy (2002).

‘What People Wore, Anglo-Saxons to 1940s’ (1991). Local school children donned costumes from
the Hampshire Wardrobe to illustrate a talk by Margaret Bunyard.

‘Teacher’ Miss L. Frankum, arrived complete with desks, pupils and slates for her talk, A Victorian Schoolroom (1992). The evening was very enjoyable and undoubtly brought back school-day memories to some of our older members. 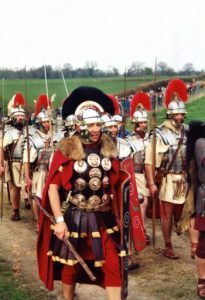 Tadley Memories by Roy Bowman (1994) was probably the most well attended meeting with ‘standing room’ only. Roy brought along many old working tools and other implements from his earlier days in Tadley.

Village Shops by Sadie Ward (1994). Unfortunately Sadie arrived late, flustered and apologetic having lost her carousel of slides on the way to the meeting after she placed them on top of her car for a while before leaving Mortimer West End. Fortunately, the slides were eventually found a week or two later, in a ditch by Reading Road in Mortimer.

The Art of Bodging and Pole Lathing by Peter Lewis (1995) was held outdoors where he set-out a pole lathe. On this warm July evening Peter enlightened everyone with his demonstrations of furniture production. Members were encouraged to have a go. 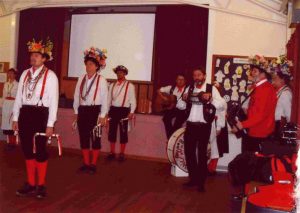 Basingclog Morris Group ‘tripping the light fantastic’ in 2003. For an evening St Pauls’ Church Hall became a world of brightly coloured costumes, joyful music and the crash of clogs on the wooden floor!

For noise, The Basingclog Morris Story (and demonstration) of clog dancing (2003) must top the list. Eight well-built adults in clogs, skipping and stamping their way around St Paul’s Church Hall, certainly tested the strength of the floor! (see photo below.)

Members are also encouraged to give talks and Derek Ward, one of the founder members of the Society, has given two, the first in November 1992 on Weather Forecasting – Old and New. In January 1995 he recounted his experiences with the International Geophysical Year Expedition to the Antarctic with Sir Vivian Fuchs – penguins, penguins and yet more penguins!