Gerald Hamilton Webb was born on 16 February 1915 at Browning Hill Farm, Baughurst. He was baptised in St Stephen’s Church, Baughurst, and is buried in the churchyard, but is not named on the Baughurst War Memorial. 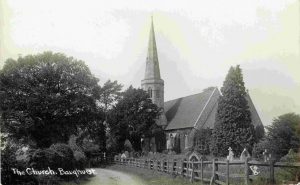 St Stephen’s Church, Baughurst where Gerald was baptised and is buried.

Gerald came from a long line of carpenters and wheelwrights; his great grandfather, Thomas, is recorded as such in the 1841 Tadley Census. Ensuing sons, grandsons and nephews continuing in these trades. However, in 1901 Gerald’s father and grandfather are recorded as farmers at Browning Hill. Gerald’s father remained at Browning Hill with his young family until the early 1930s when they moved to ‘Corner Cottage’ at the junction of Shaw Lane and Baughurst Road, then known as Webb’s Corner, where he became the village carpenter and undertaker. Gerald’s father died in 1938. Whether Gerald followed in the family trade when he left school is not known.

Gerald married Kathleen Brown on 6 April 1940. Kathleen lived at Burrell’s Farm, Tadley where her father Harold was farmer. At that time Gerald’s occupation was recorded as a ‘Chauffeur’.

Gerald and Kathleen had a son, James ‘Jimmy’, born 20 September 1944 at Brunswick Square, Gloucester. His parents at this time were living at Haresfield, Gloucestershire.

At the time of Gerald’s death Kathleen was back living at Burrell’s Farm, Tadley. We believe this may be the reason for his name being on the Tadley War Memorial. 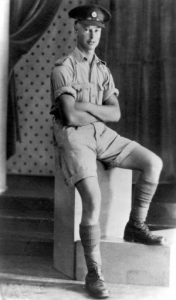 He served as a driver in the Royal Army Service Corps (service number T/195919).

Between 13 June 1940 and 5 February 1941 Gerald was posted in the UK. There then followed a period overseas, including: Iran, Iraq and further service in the Middle East. From 11 November 1943 he appears to have been on home postings.

Gerald was medically discharged from the Army on 3 December 1945. His discharge papers, dated 1 October 1945 (Hastings), give the reason for his discharge as osteomyelitis in his left leg. Osteomyelitis is the medical term for a bone infection, usually caused by bacteria. It most commonly affects the long bones in the legs, but other bones, such as those in the back or arms, can also be affected. 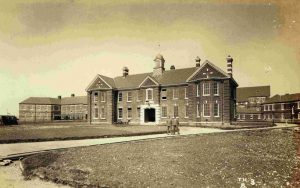 Park Prewett Hospital – work on the County Asylum at Park Prewett was incomplete at the start of World War I and the army was dispatched to finish that work already begun. In 1917 the 4th Canadian General Hospital took control and remained for the duration of the war. In 1921 it eventually opened as a mental hospital only to revert to use as a military hospital during World War II; Rooksdown House becoming a 120-bed plastic surgery unit.

Following his discharge it is believed he spent his final weeks at Park Prewett Hospital, Basingstoke where he died of tuberculosis on Sunday 20 January 1946, aged 30.

Gerald is buried in the churchyard at St Stephen’s Church, Baughurst. 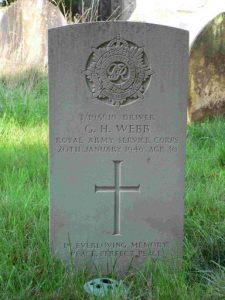 The inscription on his headstone reads: ‘In everlasting memory. Peace, perfect peace’.

Gerald was awarded one medal: the War Medal 1939-45. This would have been sent to his wife.