Tadley War Memorial was unveiled on Remembrance Sunday (10 November) 1929. The site was located on the western side of Tadley Hill opposite what is now known as Rowan Road, on a piece of land kindly given by Mrs Chetwynd Christy, of Elmhurst.

The memorial consists of a rough hewn granite Maltese cross on tapered granite base, and slab, on concrete, built by Mr F H Sutton, monumental mason, of Basingstoke. It is inscribed in raised lead letters in block type: ‘To the Glory of God, and in grateful remembrance of those who gave their lives in our defence. 1914-1918’.

Originally it listed just 30 men who died during World War I. After World War II, the names of those who had died in that conflict were added and in 2011 the name of Frederick Nash (who died on 19 May 1918) was also added. Tadley has no war dead from recent conflicts.

The memorial has, over the years, had three different locations. With the post war increase in traffic the British Legion became concerned for the safety of the public when attending Remembrance Day services at its original location. In March 1962 they petitioned Tadley Parish Council to have the memorial removed to the Memorial Hall at The Green. This involved complying with numerous regulations relating to both the War Memorial and the new site at the Memorial Hall; in particular how the removal was to be funded. Eventually, on 5 November 1963, it was unceremoniously transferred on the front of a Chaseside mechanical digger to its new location. On Sunday 10 November a service of Dedication was held prior to the annual Remembrance Day service. Sadly, while sited at the Memorial Hall it was vandalised and a request was made to the Diocese of Winchester for it to be relocated to St Paul’s Church, nearby. Finally permission was granted and on 13 September 1986 it was moved to its present location in the grounds of the church.

Following the removal of the War Memorial from its original location in 1963 and the subsequent reconfiguration of New Road in 1981, a new memorial garden was established just north of the original War Memorial site. Years of neglect eventually necessitated the garden’s restoration. In 2005 a grant of £3,804 from the Basingstoke and Deane Borough Council enabled Tadley Council to undertake this. In October 2005 the garden, located near Hicks Close, was re-planted with shrubs by members of Heath End Gardening Club. Metal railings were added to highlight the footpath to the newly commissioned memorial granite cross made by A F Jones of Reading at a cost of £3,231. The cross was put in place on Friday 4 November 2005.

Two other memorials in Tadley

On 6 June 1997 a  plaque, dedicated to the people of Tadley, hosts to the USAAF during WW II, was erected at Blake’s Lane, on the south wall of the Toucan Travel building. This was designed and unveiled by American G Paul Gerbracht. Paul was attached to the newly formed 458th Service squadron, 318th Service Group and arrived in Tadley prior to D-Day. Throughout the afternoon and evening of the 3 June 1944 the 458th Squadron were responsible for painting the ‘invasion stripes’ on all the aircraft awaiting D-Day at Aldermaston. 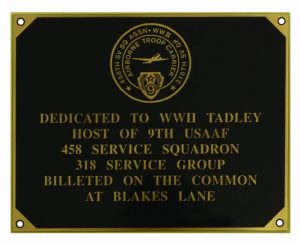 A second plaque was erected on the 60th anniversary of D-Day in June 2004. This, on the site of the Aldermaston Airfield, Station 467, now AWE, was dedicated to the memory of those members of the American Airborne Forces who died during World War II. This plaque was initiated and designed by Gordon Timmins, MOD police dog handler and local historian.