The Americans in Tadley during World War II

Horsa gliders with their tugs lined up ready for D-Day. Note the rings on the aircraft fuselages which were unique to the D-Day missions – used as a means of identifing friendly aircraft. Prior to the start of the landings servicemen were living in a huge ‘tent city’ in the area now known as Newchurch Road.

A total of approximately 3,000 American troops were billeted on Aldermaston airfield and on the sites throughout Tadley between 1942 and 1945.

Aldermaston Airfield being handed over by the RAF to the Americans in October 1942. Initially it was intended as a training base for RAF bomber crews. Soon after its completion, plans for an invasion of Europe were drawn up and the Americans arrived. 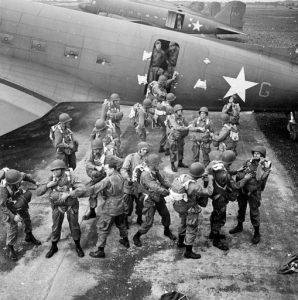 Paratroopers of the 503rd US Parachute Infantry Regiment prepare to board a C-47 Skytrain of the 60th Troop Carrier Group. Another C-47 (serial number 41-7767) is visible in the background.

Primarily a transport base, various American units were stationed at Aldermaston during the war. This 1943 photograph shows a CG-4A glider being towed by a jeep of the 315th Airborne, who were stationed at the base between December 1942 and November 1943.

The interior of an airfield accommodation building. Conditions seem basic – a single heater in the middle of the room – but were better than at many other bases!

Aldermaston Airfield was involved in several important missions during the war including D-Day and Operation Market Garden in 1944. On D-Day, planes and servicemen from Aldermaston were amongst the first to cross the Channel. 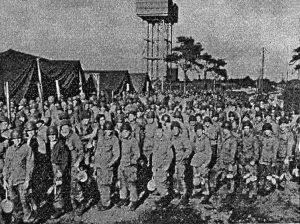 A very grainy photograph taken prior to D-Day, showing paratroopers from the 101st Airborne, with the ‘tent city’ and the water tower in the background.

The airfield was initially under the jurisdiction of the Eighth Air Force (United States Army Air Force), and was home to several Douglas C-47 Skytrain Troop Carrier Groups (TCG). The 60th TCG was transferred to Aldermaston from East Anglia, the first men arriving on 7 August 1942. The 60th trained with Army paratroop units at Aldermaston, transporting them as part of Operation Torch, the invasion of French North Africa on 8 November 1942.

Replacing the 60th TCG was the 315th TCG, also equipped with C-47 Skytrains. Their arrival at the airfield was delayed due to bad weather in Greenland, at which time the RAF took back control for a brief period. The 315th arrived at Aldermaston in December 1942 and remained until 6 November 1943. In February 1943 a unit of the RAF joined the 315th TCG for a month. It was the only time that the RAF used the airfield.

The Ninth Air Force replaced the Eighth and were given jurisdiction of the airfield in October 1943, following their return to the United Kingdom from Libya. The remainder of the Eighth Air Force TCGs and some of the 315th group were transferred to Ninth Air Force.

Several units came and went in the following months, but stability returned to

Aldermaston with the arrival of the 434th TCG on 3 March 1944. It was programmed to carry out intensive training with the 101st United States Airborne Division in preparation for the invasion of northern France. The 434th was one of many groups in the South of England trained and designated to deliver gliders for Operation Overlord on 6 June (D-Day). The 52 C-47s (Dakotas) of the 434th TCG each towed a Waco or Horsa glider, with men and equipment, to Normandy, losing only one aircraft en-route. For this and two follow-up missions with gliders and supplies the group was awarded the Distinguished Unit Citation and the Croix de Guerre with Palm.

In September 1944 the 434th transported elements of the 82nd Airborne Division to the Netherlands as part of Operation Market Garden. The 434th remained at Aldermaston until 12 February 1945.

It is difficult to convey the immensity of activity which existed in the skies and on the ground in the three years that the USAAF occupied the airfield; the arrival and departure of the various units, C-47 practice flights day and night, later with gliders in tow, Flying Fortresses and road transport bringing in cargo, combined with the noise of Spitfire engines being tested at Hangar 5.

The Americans’ time at Aldermaston finally came to an end on 15 June 1945 when the airfield was returned to the Air Ministry.