Blue Gown (1865) was a sweet-tempered, compact, short-legged,  bay colt that won the Derby in 1868. It was owned and  bred by Sir Joseph Hawley of  Hawley House in Tadley,  He sold the horse in  1869 to a French syndicate for 5,000 guineas.  Blue Gown  returned to England, retired and was sent to stud in Austria; becoming the leading sire in Austria-Hungary in 1879.

A year later he was shipped back to England  and  in 1879 was bought by bloodstock speculator Hume Webster who was very good at marketing  horses to foreign purchasers. As a result, in the fall of 1880, an American James R. Keene  purchased Blue Gown for his Kentucky Stud at a cost of $20,000.

Blue Gown’s tragic journey to America was reported widely in America, including in the New York Times [1]:

Turfmen throughout America learned with regret that Blue Gown, the famous winner of the Derby in 1868, died on the voyage to America,  having been shipped in the steamer Victoria, leaving London on Nov. 13th. The vessel had been tossed by rough seas until the rudder broke on the 25th, and no doubt Blue Gown thrashed about in his cabin and ruptured a bowel by being knocked about. The body of the horse was cast overboard, by the crew, into the Atlantic Ocean [2]

Not only is the death of Blue Gown a great loss to Mr. Keene, but breeders of thorough-breds and turfmen generally will feel it, for the arrival of the horse had been eagerly anticipated for more than a week past. The sympathy of the sporting public will go out to Mr. Keene, as he as shown much enterprise in his brief turf career.

In buying Blue Gown  Mr. Keene had hoped to secure not only a highly bred animal but fine race-horse, for such he proved during his short and eminent career on the turf.  Blue Gown was bred by Sir Joseph Hawley in 1805. There were two other horses on board the Victoria belonging to Mr. Keene, and as far a could be ascertained they were sound after their long and tempestuous voyage.”

TADS Question: Does any one know the whereabouts of a painting of the Derby winner ‘Blue Gown’, thought at one time to have been hanging in Hawley House? After some research TADS knows that the painting did exist and that at some time it was probably sold through Sotherby’s.

Blue Gown, not only prompted the painting of portraits…

Blue Gown was the  subject of national interest and turf tip prior to the Derby wrongly suggested that Blue Gown would fail to win and even included a poem to make the point  [3] !

A rich crop of the curiosities of Turf prophecy might be gathered from the articles which appeared in the newspapers, sporting and general, immediately prior to Blue Gown’s — or Lady Elizabeth’s — Derby.  A more than commonly inspired fore-cast, written by a prophet in a fine frenzy, appears to demand rescue from the columns of the daily journal which it inflamed. It ran, not to say rushed, on thus :

‘Expressing a final opinion as to what Judge Clark may say when the telling moment arrives, let me fancy the preliminary canters over, and the candidates for England’s greatest prize are seen wending their way through the paddock with Mr. M ‘George awaiting their arrival at the gate. Excitement is now at its highest pitch, and thou- sands and thousands are almost breathless at the sound of “They’re off!” for fear the “All right” should not be passed by Mr. Manning in favour of their blue riband representative. Preceded by one or two false starts, the flag falls with the pioneers for Danebury, Kingsclere, and Newmarket rushing to the front ere the top of the hill is gained, and we may picture Cock of the Walk for Lady Elizabeth, Green Sleeve for Blue Gown, Pace for Speculum, and King Alfred for Suffolk, all in the van before the mile post is reached.

At that point the pace is so great that the rubbish is disposed of, and, tearing down for Tattenham Corner, the leaders in turn give way in favour of their more trustworthy stable companions. Fairly in the straight, nearer and nearer grows the strife and louder swell the shouts. “Sir Joseph” cry the “upper ten,” “Lord Hastings” scream the touts. Within a quarter of a mile of home the favourite takes her place on the whip hand with two of the ” cherry ” representatives hugging on the rails, and Daley, as with Hermit last year, biding his time most patiently in the middle of the course. The distance is reached, and Paul Jones, Orion, and the Duke’s colours fail in their attempt to overhaul the leaders. At the lowerend of the stand enclosure the four great horsemen of the day are singled out, Custance and Wells hard on the Kingsclere pair, and Fordham, with a ” Lord Clifden ” eye on Daley, preparing for a final rush. [3]

The shouts are fearful, for the struggle’s close,

And no one knows how strong he’ll get the dose ;

For, in spite of private spins,

Despite the Poem Blue gown went on to win the Derby in 1868.

Finally, Blue Gown’s was commemorated at Park House which had a thatched summer-house surmounted by a vane (an effigy of Blue Gown showing the way of the wind) that stands forth most picturesquely, the beginning and principal feature of the trainer John Porter’s handsome home.[3]  Park house had many memorable sideboard ornaments, but they all yield in interest to the hoof of Blue Gown.  It was a thoughtful and gracious act on the part of the captain of the ship to have one of the horse’s hoofs removed for personal presentation to his old trainer, and an act that the recipient of the relic greatly appreciated.  [3] 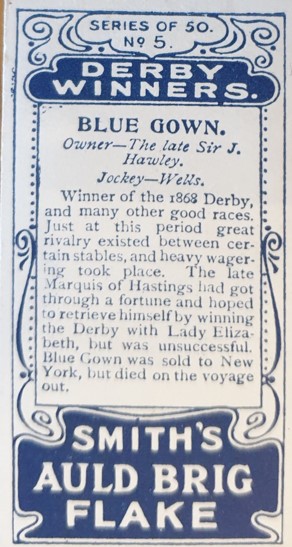 TADS was founded in 1984 for people with an interest in local history.

Tadley  has a very diverse history, populated with both benefactors and tyrants. Past inhabitants of Tadley were involved in Regicide and the “Parliament Fart” . Tadley has stories of unique exorcisms and ghosts.  Stagecoaches used the two local turnpikes and  at other times balloons and planes  crashed locally.   Spitfires were assembled in  Hanger Road. Past plans have even  included flooding much of the surrounding area and building a tunnel under Tadley.  It is a place where rural crafts excelled and where Oxford and Eton fought for land rights.

While our Facebook Page and Facebook Group are free to join, We have significant running costs providing the website, social media,  monthly online talks from external speakers, as well as research and archiving costs.

Please join us at TADS