Tadley and the Great Plague

A recent television series about the great plague of 1665-66 prompted the question, did it affect Tadley? It is well known that it had a massive effect on the populations of cities such as London, where for many parishes there are very good records of the multiple deaths. Some estimates are as a high as 200,000 deaths for the whole capital. In 1665 across the whole of England there were nearly 87,000 excess deaths above the average of the previous five years. Most of the excess deaths were in London and nearby towns. For example, Colchester lost 4,817 people to the pestilence, about half the population.

In Hampshire there is an obelisk in Winchester next to the Hampshire County Council offices which is memorial to the plague victims. In Southampton it is recorded that 1200 people died in the outbreak of plague in the summer of 1665. So from this we know the plague was present in Hampshire. That said, I have not found anything about the effect of the plague on countryside communities, other than the well known case of Eyam in Derbyshire which is often called ‘the plague village’. There, to stop the spread of the plague to other communities, the villagers isolated themselves and 267 people died – 38% of the population.

The Black Death was the name given to the devastating outbreak of plague which reached Britain from the continent in 1348. It was probably the same disease as 1665, now thought to be bubonic plague, Yersinia Pestis. The 1348-49 outbreak is estimated to have killed one third of the population of England. Florence Davidson in her book, ‘A History of Tadley’, says ‘A terrible plague, called the Black Death, raged throughout England, and was very bad in the villages around Basingstoke, in Tadley, Pamber, etc. Entire families died of it in a few hours, and there were hardly enough people left to bury the dead or to do the work of farms, which lay desolated. No services were held in the Church and no wheat was sown.’ The monograph, ‘The Black Death in Hampshire’, by Tom Beaumont James, published in 1999 as No. 18 of the HCC Hampshire Papers, says the clergy in Hampshire were particularly affected. That is especially true of Silchester Church where the list of rectors names shows no less than six incumbents during 1349. (See Appendix 1).

It is difficult to know how many deaths the Black Death caused as there were no parish records kept at that time.  However in London there are some good records of wills.  These wills not only record names, households, and goods, but also give the dates the wills were written and proven. From these researchers have estimated that the rate of death in London could have been as high as 60% of the population.

One of the large access shafts for the excavation of the Elizabeth Line railway tunnels under London, cut down through a known Black Death cemetery. Archaeologists from the Museum of London analysed the bones and from the teeth of one skeleton it proved possible to get a very good extract of DNA of the disease that had killed the person.  This DNA was then compared with DNA taken from a victim of a recent outbreak of bubonic plague in Madagascar.  Much to the surprise to the investigating scientists the DNA samples were identical – Yersina Pestis.

In Britain there were repeated outbreaks of plague from 1348/49 until 1665, perhaps 32 in all, with those of 1563, 1593, 1605, and 1625 being particularly severe. After the 1665-66 outbreak the plague seemed to lose its potency and although that was not the last outbreak in Britain, it was the last on a large scale which is perhaps why it is known as the Great Plague. (Proportionally more people were killed by most of the earlier severe outbreaks). There was a notable outbreak in Glasgow in 1900 and it is thought to have occasionally occurred in Suffolk between 1906 and 1918. It is still present elsewhere in the world.

The obvious way to find if there was an effect on Tadley was to look at the parish burial records and see if there was a spike in the number of burials in 1665-66 compared with the preceding years. This is similar to the measurement of excess deaths during the current Covid-19 pandemic (2020 and beyond).

There are comprehensive transcriptions of Hampshire Burial records published on compact disc (CD) by the Hampshire Genealogical Society. These include Tadley Parish but unfortunately the earliest Tadley burial records listed are for 1695, thirty years after the period of interest. Similarly the earliest recorded grave in St Peter’s churchyard is 1731. It was suggested that as Tadley was for many years a part of the parish of Overton the Tadley Burial records might have been included with the Overton records, but the Overton records on the CD do not show anybody as living anywhere but Overton. So we must assume that the earlier Tadley records did not survive.

As an alternative method of investigation, I decided to look at all the available parish burial records for this part of North Hampshire and adjacent Berkshire. (Berkshire burial records are published on CD by the Berkshire Family History Society). To get a good view of the number of burials before and after the Great Plague in order to determine what was roughly the usual number, I looked at the years 1640 to 1675. I found relevant records for 16 parishes and recorded the number of burials in each year. The parishes were:

Appendix 2 is a map showing the parishes examined.

One obvious anomaly showed up – the count for Kingsclere, 1,000 burials in all, showed only 4 burials in 1666 against an average of 32 for the years 1661 to 1665. The counting of the burials was done alphabetically and rechecking the records I found that there were no deaths in 1666 after Eliverus Cook, so I assume that some pages are missing from the surviving records. The count up to that name has been included in the table as Kingsclere (part). Even so, the 4 deaths compared with an average of 6.8 for the preceding 5 years, so are slightly lower than average.

There are also some gaps in the the records. That is not unusual with old records but it may also be due to what is termed the ‘Commonwealth Gap’, the years following the end of the English Civil War when the keeping of Parish Records was suspended by the state. In some cases the clergy ignored the ruling and in others they kept separate records from which they completed the parish records after the restoration of the monarchy. For the parishes I examined the records are more complete than might be expected and, with the possible exception of Kingsclere, provide a meaningful set of data for the period of interest.

Appendix 3 is a table of the results.

There are four parishes which appear to show increases in burials in the years 1665–66 beyond the usual range: Basingstoke, Pamber, Silchester, and Sulhamstead Abbots. There are others like Overton, where the number is much lower than the normal range.

Basingstoke – The year 1666 does not stand out particularly with 76 burials when compared to other years, e.g. 1661 has 81 deaths, 1668 has 74 and 1671 has 91. What is exceptional is that 42 of the deaths in 1665 and1666 are marked as ‘plague’. Obviously the clergyman completing the entries thought it was something unusual. So this is reliable evidence that there was plague in North Hampshire.

Appendix 4 is a list of the people who died of plague in Basingstoke in 1665-66 in chronological order.

Appendix 5 has a list of the people who died in Pamber 1666 in chronological order.

Silchester – 1666 has approximately double the number of burials at 11 compared to the 6.4 average for 1661-65. So again it reasonable to assume it is most likely due to plague.

Appendix 5 has a list of the people who died in Silchester 1666 in chronological order.

Other causes of death

The plague was not the only contagious disease of those times. Ian Mortimer, in his book ‘The Time Traveller’s Guide to Restoration Britain 1660 – 1700’, has a table summarising ‘The London Bills of Mortality’ showing causes of death in London. In order of importance for the period 1663 to 1694 they are:

Why teeth? Tooth abscesses are killers as they can easily result in sepsis. Tooth extraction in those days was pretty crude and brutal but could be a life saver.

There are other diseases not mentioned such as rickets and syphilis. Rickets (the result of vitamin D deficiency) was prevalent in children as more people crowded into towns. Mortimer says that syphilis was on the rise following the abandonment of the puritanism of the Commonwealth and the restoration of the merry monarch. There is no mention of accidents which must have been common and might have been hard to survive. The life of those left with permanent injuries must have been greatly shortened.

A big killer was childbirth and being a child. It has been estimated that 17 mothers died per 1,000 births, overall 4% of mothers. If a woman had 6 children (a conservative number) she had a 1 in 10 chance of death. Infant and child mortality was high before the age of 10 and this shows in the burial records with many names marked as infant or child. Mortimer’s book says one study of the year 1680 showed that 37% of children did not reach the age of 15.

One disease you may have expected to see mentioned is cholera. Surprisingly, it was unknown at that time. The first cholera pandemic emerged out of the Ganges Delta with an outbreak in Jessore, India, in 1817. The disease quickly spread throughout most of India, modern-day Myanmar, and modern-day Sri Lanka by travelling along trade routes established by Europeans. It reached Britain about 1826.

There is no doubt that the plague was present in our region of North Hampshire. It is unlikely we shall ever know for certain if there was plague in Tadley, but it is quite possible as the adjacent Pamber parish was almost certainly affected. There were plenty of other things that would kill people and a minor outbreak might not be regarded as serious in a small country village like Tadley. 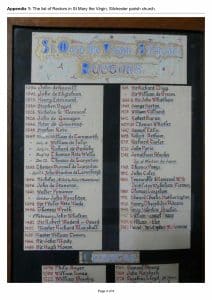 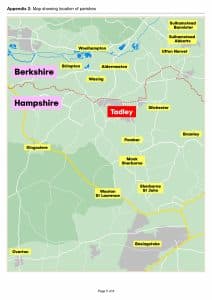 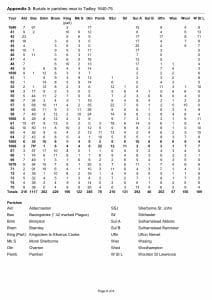 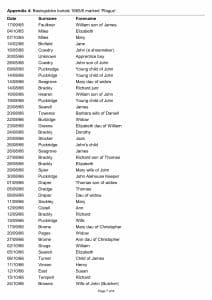 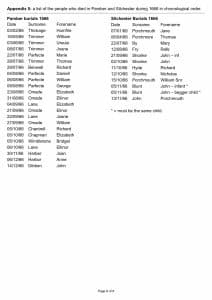