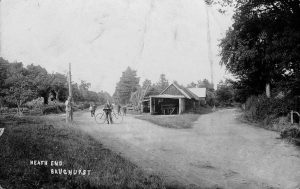 His parents were Earl and Annie Elizabeth Appleton (née Sandford). Earl was a ‘General Labourer’. 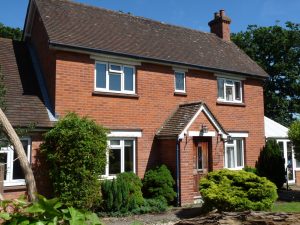 The 1901 Census for Tadley lists him as aged 4 and living at Heath End.
In the 1911 Tadley Census he was aged 14 and living in Baughurst (Heath End). We now know this to have been at ‘Gladstone Cottage’, Bishopswood Lane, later renamed ‘St Ann’s Cottage’. His occupation was listed as ‘Labourer in Woods’. He was probably working with his father and elder brother Marcus, both also recorded as ‘Labourer in the Woods’. His father worked as a timber cutter for Baines of Reading who rented land on which the Atomic Weapons Establishment (AWE) stands today.

Albert enlisted in Reading. He served as a private in the 5th Battalion of the Princess Charlotte of Wales’s (Royal Berkshire Regiment) (service number 16845). 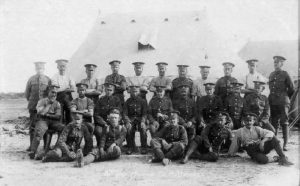 Soldiers of the Royal Berkshire Regiment.

The 5th Battalion was the first of the new Royal Berkshire battalions to be formed after Kitchener’s appeal for 100,000 volunteers at the start of the war. Lieutenant Colonel Foley was given the task of forming the new unit. After a few days at Brock Barracks in Reading the new recruits were moved to Shorncliffe Army Camp near Cheriton in Kent on 15 August 1914 where they immediately began training. They transferred to Folkestone on 2 January 1915 and on 23 February to Aldershot to join the rest of their new division. They were now part of the 35th Brigade, 12th Division which moved to France on 30 May.

The battalion’s initial training was at Armentières. It moved to Ploegsteert on 14 June where it learnt trench warfare from a regular battalion. Throughout the summer of 1915 it alternated between trench duty and periods in reserve. 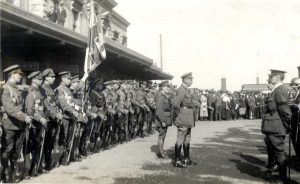 The return of the 5th Battalion Royal Berkshire Regiment to Reading on 18 June 1919. The men are commanded by Colonel Goodland and are being addressed by Colonel Foley. [Reading Central Library]

Despite the Battle of Loos ending the previous October, there was still fierce fighting in that sector during 1916. From late February to June, the emphasis was on mine warfare. It was a period of almost daily shelling, with the occasional mine going up and the ensuing rush by both sides to try and capture the resulting crater. Every now and then the Germans would start shelling which would immediately be answered by the British guns. Without warning a huge explosion would rock the earth around them as an underground explosive was set off. A lot of time was spent carrying bags of chalk spoil, from the excavated mines to the rear, to be hidden so the Germans would not realise what they were up to. The mines, which contained many thousands of pounds of explosive, would send tons of earth into the air, showering down on the soldiers, killing and burying them at the same time.

Albert died towards the end of this period, during the preparations for the Battle of the Somme (1 July – 18 November 1916) and about a month before the battalion went into action at Ovillers on 3 July 1916. 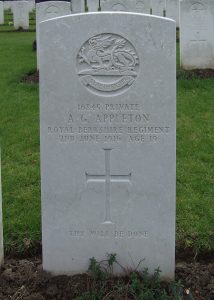 The inscription on his headstone reads: ‘Thy will be done’.

He is also remembered on both Tadley and Baughurst War Memorials.

Besides Albert, amongst those remembered on Tadley War Memorial is Albert Chapman (no. 3) who also served in the 5th Battalion of the Princess Charlotte of Wales’s (Royal Berkshire Regiment). 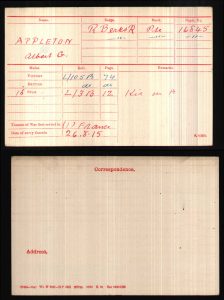 Albert was awarded the Victory medal, the British War medal and the 1914-15 Star. These would have been sent to his family.

Return to top of page