Three members of TADS Project Group were clearing part of St Peter’s graveyard while looking for a soldier’s grave. They were surprised to find what had been an imposing grave, now broken, in a very remote area of the churchyard. The inscription on it was: ‘Herbert Harlakenden Gilchrist, Artist and Author, Born 1857, Died 1914 Aged 57’. Nobody had ever heard of him. What was his connection to Tadley? 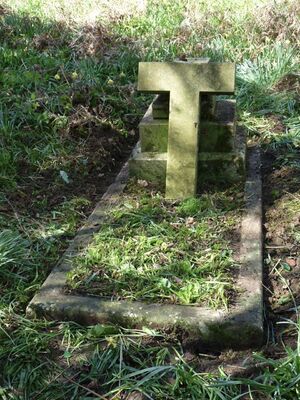 Herbert was born in Chelsea, London in March 1857, the second son of Alexander and Anne (nee Burrows) Gilchrist. The parents were both writers, although not particularly successful. Alex’s ‘Life of William Etty’ (a British painter) was well received by some but not exactly commercial. They knew and were friends with many writers and artists, some well known even today e.g. Thomas Carlyle; Dante Gabriel Rossetti and his sister Christina; Ford Maddox Brown; Samuel Palmer; Alfred Lord Tennyson.

In 1861 Alex died of scarlet fever caught from his daughter. Anne completed and published his ‘Life of William Blake’, the poet in 1863.

Herbert showed talent as an artist and was accepted as a student at the Royal Academy, but his studies there were ended when in 1876 Anne and her three younger children moved to Philadelphia, USA so that daughter Beatrice could attend Medical School. (At the time women in England were barred from studying medicine). Herbert continued to study painting. While in Philadelphia the family became friends with the American poet Walt Whitman, whom Anne had long admired. After two years in Philadelphia they moved to New York before returning to England in 1879 and settling in Hampstead, London. Anne died in 1885.

Herbert wrote a biography of his mother which was published in 1887. Afterwards he returned to the USA to resume his devotion to Walt Whitman and painted what was acknowledged to be a very good portrait of him. Unfortunately Whitman preferred the portrait by the artist Eakin. Herbert stayed in Philadelphia until the death of Whitman in 1892, then returned to England to resume his career as a fairly successful painter. He seems to have been well known in English literary and painting circles, but he never became a member of the Royal Academy.

The Tadley Connection and the end

Suicide of an Artist

An inquest was held on Thursday, in last week (9th), at the Fox and Hounds, Tadley, by Mr John Clarke, Deputy Coroner, on the body of Herbert Harlatkenden Gilchrist, an artist, aged 57 years, who was found in his bath with his throat badly gashed.

Alfred Haines, of 8 John Street, Bedford Row, London, a solicitor, said he had been acquainted with the deceased since childhood, and with the whole family. About eight years ago the deceased had a mental breakdown, and was for a time at Holloway Sanatorium. He perfectly recovered from that, and was well until about 18 months ago he had a bad attack of influenza, when he was more or less mentally affected. He was attended then, and quite recovered. He was in London about March last, and seemed well then. In all these breakdowns he had never shown a suicidal tendency.

George Roller, an artist living at Tadley, said he was well acquainted with the deceased, and for about 12 months he had assisted witness. The deceased dined with him on Sunday night, and he walked across the Common with him afterwards and left him before he reached home. The deceased appeared normal when they parted; he had appeared curious and quiet previously in the evening. – By Mr Haines: He thought the deceased had not been quite right lately. His pictures were this year rejected by the Academy, and although he took it very well he thought it might have preyed on his mind.

Eliza Wells, of Tadley, said that Mr Gilchrist had been in the habit of staying with her when in the neighbourhood. She saw him on Sunday night for a moment. At 7.48 a.m. on Monday morning she called him, and heard him making a noise as if there was something wrong, and she summoned a neighbour. — By Mr. Haines: She noticed on the present occasion that deceased seemed quieter than usual and depressed.

Max West, of Tadley, an artist, said that on Monday morning the previous witness asked him to accompany her as there was something wrong. He rushed round and went up and found Mr. Gilchrist sitting in a bath. He thought at first it was an attack of haemorrhage, but on drawing the blind back he discovered the deceased’s throat was cut. He sent for the doctor at once. There was nothing in the deceased’s hands. Subsequently the deceased wrote in the book “I am innocent’ and signed it Witness waited and assisted the doctor.

Dr. Alfred Alexander, of Tadley, said that on Monday morning he was summoned to see Mr. Gilchrist at 7.55. He arrived at 8.10. Deceased was then alive and suffering from extensive and deep wounds in the neck. The wound was in itself sufficient to cause death. He died of extensive haemorrhage followed by collapse and heart failure. There were other injuries on the body, all of which were consistent with having been self inflicted. He saw two implements in the bath that might have inflicted the wounds; they were an open razor and a fair-sized pair of scissors. George Roller, recalled, said he could emphatically throw no light on any fact that would be likely to cause deceased to write “I am innocent” and he knew of nothing of that nature on deceased’s mind.

The Coroner having summed up, a verdict of suicide during temporary insanity was returned by the jury.

Thus Herbert came to be buried in Tadley St Peter’s graveyard. Presumably, because it was suicide his grave was located well away from every other as was the custom at that time.

ii) Eliza Wells house was ‘Arundel Cottage’, Franklin Avenue, Tadley. It is located to the west of the Holmwood Healthcentre.

iv) A very striking portrait of William Michael Rossetti (1829-1919) painted by Herbert in 1895 is at the National Trust property Wightwick Manor, Wolverhampton. To see this painting on-line go to: http://www.nationaltrustcollections.org.uk/object/1288959

Return to Top of Page