“Putting Tadley on the map: from Gough to Google.” By John Leighfield

We were  very pleased to have John Percival Leighfield CBE provide our June  talk.  He has a passion for maps since his schooldays and discussed, in a highly illustrated talk, how maps have developed from the 14th century until the present day. He is a British IT industry businessman who was previously chairman of Research Machines from 1993 until 2011.  Currently he is a Director of Getmapping, a UK supplier of aerial photography, mapping products and data hosting solutions. 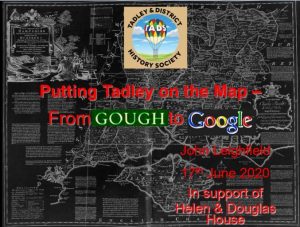 Civilisations have produced maps and the first known depiction of the BritisIsles was by Ptolemy in 150 AD, but it was not until the late 10th century that the first ‘native’ maps were produced. The most significant early map of the British Isles is the ‘Gough’ map of 1360 which is held in the Bodleian Library, Oxford. (Richard Gough was a collector who gave his collection to the Library in 1774). The maker
of the map is not known, but it has been shown to be surprisingly accurate when compared with the modern Ordnance Survey (OS) maps.

The 16th Century saw the flourishing of mapping, partly due to the advent of printing. Although early maps were printed in black and white, the addition of hand colouring was common.

The recording of estates and land ownership was a driver for the making of maps, particularly after the dissolution of the monasteries when the King Henry VIII gave land to his favourites. There was also a military threat which caused Thomas Cromwell in 1539 to call for the mapping of the South Coast of England. Military needs eventually led to the founding of the Ordnance Survey in the late 1700s.

In 1570 Christopher Saxton was commissioned to survey England and Wales and Queen Elizabeth gave him a 10 year monopoly on the printing of maps. He produced the first atlas of England and Wales in 1579. Tadley is shown on the Oxford and Berks map (1574) as Tadlow and this spelling followed on many later maps. The Saxton maps are very clear and are accurate and were the basis for nearly all other maps for many years to come. The last edition of Saxton’s own atlas was published as late as 1749.

John Norden, who the speaker regards as a very good surveyor, published a map of Hampshire in 1595 clearly showing Tadley.

Plagiarism was a way of life for map makers and it is easy to see as mistakes are continued from one map to another down the years. One amusing case was an apparent village named Quare on a map of Somerset. Quare is a latin word, in this case meaning ‘I don’t know’. The query was not resolved before the map was engraved and Quare remained on maps as non-existent place for years and
years.

John Speed, (atlas of 1611) whose maps are well known and still published today as they are very attractive, was a self confessed plagiarist but he developed the art of map publishing by adding decorations, heraldry, boundaries and town plans. On his map of Berkshire, Tadley is copied from Saxton and on his Hampshire map it is copied form Norden.

John Ogilby, who seemed to be a person for whom disaster was a way of life – (injuries, fires, shipwreck), came to maps by producing a survey/map of London after the Great Fire of 1666 in which he lost his book seller business.
He was the first person to add roads to maps in his monumental work ‘Britannia’ published in 1675. Its one hundred plates are ‘strip maps’ of roads, a format still used today. Following his lead, roads were soon added to the earlier atlases such as Saxton and Speed. Other people at this time produced very small maps, even pocket books and playing cards.

In the 17th Century the fundamentals of surveying were established with the regular use of compasses, theodolites, chains, measuring wheels, together with the principle of triangulation. Surprisingly there were no newly surveyed national maps until the middle of the 18th C when the Society of Arts (now RSA) offered a £100 prize for maps of a scale of 1in to the mile or larger. This resulted in 23 submissions over the next 40 years of which thirteen were successful. Notable were the works of John Rocque (1761), Isaac Taylor(1759) and Thomas Milne (1791) who all covered our area.

In 1760 Thomas Kitchen and Emmanuel Bowen, who were prolific mapmakers, produced ‘The Large English Atlas’ with 27 x 20 inch pages
based on a the first new survey since Saxton.

John Cary was the last of the great independent map makers producing a wide range of county atlases of very high quality and accuracy from the 1780s until his ‘New English Atlas’ of 1809.

The foundation of the Ordnance Survey in 1792 because of the Napoleonic threat of invasion resulted in mapping at a level and comprehensiveness unmatched in the world. The maps were all surveyed from a baseline just over 5 miles long set out on Houndslow Heath. This baseline continued to be the bedrock of OS maps until well into the 20th C. The first OS map covering Tadley was published in 1814, although the survey work was probably done in 1808.

Since then the OS maps have evolved to the standard we know and love as the Landranger and Explorer series. But did you know other larger
scale maps were produced, including 6 and 25 inches to the mile. Urban parts of the country were even mapped at an incredible 10 feet to the mile.

Today it is all done using computers, satellites, and aerial photography. The 2020 OS digital master database is a massive 2000 TB or 2 million GB in size, a continuous and extremely detailed map of the whole of the British Isles. Not to be outdone, the Google Maps database of the World is apparently heading for 20 Petabytes.

Thank you John for your fascinating and very detailed talk which took us through mapping from ancient times to today with emphasis on how our on patch was depicted.