The Toadster of Tadley

Tadley has its fair share of local folklore, including the “Tadley Treacle Mine” and the “Tadley God Help Us” episode. The story of the “Tadley Toad” is not primarily about a Toad but a sad tale of a particular person living in “Poor Tadley” in the late 18th century.

The following version of the tale was published in 1805, in “The Sporting Magazine” a very popular national magazine that published stories provided by its readers. The anonymous author, who lived in the neighbouring Parish of Pamber vouched that the story was true based on his own experience. The language is a bit hard to follow in parts but it is well worth the effort. It might help to know that half a peck measure equated to a small bag and to remember that Satan’s metaphoric traditional disguises include the snake in the Garden of Eden and Satan’s description as “Squat like a toad, beside Eve, whispering in her ear” from the book “Paradise Lost IV” written in the 17th Century. 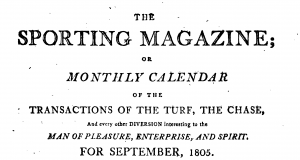 Tadley, in Hampshire, near the Bath road, and on the borders of Berks, is proverbially called “Poor Tadley”, with much reason, and is the unspeakable disgrace of the county : for the peasantry have been there, immemorially, in a most deplorable state  of poverty, at least their condition had not been amended fifteen or twenty years ago.

Here dwelt about that period, the hero of this memoir, a lone man, about fifty years of age. He inherited his house, with garden, orchard, and one field, from his ancestors, some of whom had made away with the land which had composed the original estate. What had particularly disgusted him with the world, and with human society does not appear obvious, and the probable cause was a constitutional turn to misanthropy. On the death of his father and mother, and departure of his sister into the world, he at once gave up all human society, and attached himself to that of animals generally, keeping cats, dog, poultry, etc. with which he constantly held communion.

They all lived together in a comfortable state of perfect equality of rights, until the original contract was broken by the cats, which the president of the society perceived, at length, busy in destroying all intruding rats and mice. Cats were instantly banished for their antisocial and murderous principles, and  were never readmitted, an owl, which had been admitted from compassion,  was afterwards dismissed for a similar reasons.

After this a toad became an candidate, and urging his plea every morning, whilst the man was in his garden, it was at length attended to, and many conversations took place between the parties, equally intelligible and interesting as those of old, between Mr. Toad’s ancestor and Mrs. Eve. The man now feeding the toad daily, with whatever he  himself ate, it came at the appointed hour, and even followed him about the garden, until at length this chief, regretting that so good a citizen of his community should be without shelter, and wishing to have his new friend always ready at hand for conversation, he actually built the toad a small wooden sty, into which the animal willingly crept, and in that place was daily fed, until he became of enormous size, and actually resembled a duck. The instant he heard his master’s voice, the monster would crawl out, pacing from his vast bulk, and with his fine eyes, greet his patron in loving and grateful  expression. He however knew the man’s voice so well, that he would neither listen nor stir to any other, though several persons attempted to call him out.

Whether the man was tempted by money, or persuasion, is unknown, but he at length sold the toad to a surgeon at Reading, and it was confidently asserted, that when dead, it would not go into a half peck measure, The loss of the toad, however, affected the misanthrope much, and he seemed to be, as it were stung by his conscience, for such a  piece of treachery, as the sale of a fellow animal, when most fortunately, one Sunday morning, a snake of respectable bulk and appearance, made his addresses, and begged admission into the society. This new comer was fed constantly, until at length it agreed to take the deceased toad’s lodging, which it occupied many months, to the man’s infinite solace and content, who now found himself indemnified for the loss of his toad.

Indeed,  this speckled inmate was far more cheerful and conversable, and would writhe and route himself in playful attitudes, whilst the sun beams glittered on his polished scales. He would rear himself up on end, in  order to reach the meat from his feeder’s hand; and drink milk from a saucer like a cat. The man was delighted, and his snake was thriving to an enormous bulk, some say the size of a human leg.

When certain good church-going gossips in the neighbourhood, taking it in, to their wise heads, that snakes were not Christian, which being the case, they ought not to eat Christians’ victuals, they conspired, and, in the owner’s absence, murdered the snake!

The man never after held up his head, he sickened and  soon died.